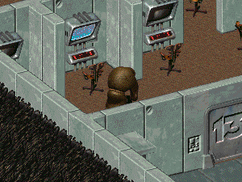 Retrieve the GECK for Arroyo
Talk to Goris
Stop the Enclave

To the right, Goris without his robe

“I'm the one who put the 'death' in the deathclaw!”

Goris, son of Gruthar, is an intelligent dark gray deathclaw, and a possible companion who resides in Vault 13 in 2241.

Goris is a humanoid figure wearing a long-sleeved, hooded robe.[1] He is a scholar and was very curious about the rest of the world. He had learned how to crudely disguise himself among humans by wearing a loose robe (because "humans have a habit of shooting deathclaws on sight") and claiming that he was really a human but had some deformity he wished to hide and traveled in the wasteland among them learning as much as he could about their cultures.

In 2241, he studied the culture his pack formed and compared it to human development along similar lines. When the Chosen One met Goris for the first time, he said that he had only been at Vault 13 for a few months and has acquired all the information he needs there, and wants to go again for his research. He does not like to travel alone, so he offers to be a companion of the Chosen One to help him in his research and wants to show that deathclaws can work with humans as friends, not enemies.

One of his particular characteristics is that he's affected by albinism, due to a different mutation with FEV.[2] His hide is completely dark grey instead of earth-tone colors like other deathclaws, and his eyes are red. He also has a sensitive hide due to his albinism, because even when he is among his pack, he always wears his robe and only removes it during combat. He also possesses a telepathic sense connecting him with his brothers, as seen when the Enclave attack Vault 13 if Goris accompanies the Chosen One: he feels his brothers are in danger and leaves the group to return to Vault 13.

Fallout: The Board Game - New CaliforniaEdit

Goris can be found randomly when taking a card from the loot deck. While in a fight with Goris is the active companion, the player character can exhaust him to negate all damage taken.

Goris appears in Fallout 2 and the Fallout: The Board Game expansion Fallout: New California, and is mentioned in the Fallout Bible.

Under some circumstances, after the deathclaw inhabitants of Vault 13 are killed, a bug will deny recruiting Goris. After recruiting him he will instantly try to return to the Vault, setting up an infinite loop of asking him to join you and him returning. This can be worked around by pressing 0 right after clicking on the conversation option to recruit him. This instantly cancels the script that returns him to the Vault.[verified]

Goris as he appears in Fallout: New California
Add an image to this gallery

Retrieved from "https://fallout.fandom.com/wiki/Goris?oldid=3352642"
Community content is available under CC-BY-SA unless otherwise noted.