The gorilla is a synthetic creature found in the Bioscience division of the Institute contained in terrariums. With the Wasteland Workshop add-on, they can be captured in cages and domesticated in settlements owned by the Sole Survivor.

The gorillas are a pet project by Clayton Holdren, whose goal is to recreate pre-War gorillas and hopefully other species. There are two specimens, and both are actually synths designed in the form of the Silverback gorilla. This is revealed upon talking to Clayton, who brings up the gorillas while introducing the Sole Survivor to Bioscience during Institutionalized.

Ghoulrillas are very similar in appearance to synth gorillas. However, these have scabs and scratches located around the body, with scraps of fur torn out as well. Their face is very rough and worn, with many skinless patches. The eyes are very dark, either lacking pupils or being entirely pupils. They range in size from small to very large.

The gorillas largely ignore the player character and wander around their terrarium. However, during A House Divided, their enclosure can be opened, where they will be hostile to everything, including the player character. This can also happen if the The Nuclear Option quests are carried out against the Institute. Also, placing an Institute beacon during Airship Down may spawn a couple of them to the player character's side. Upon breaking into the Bioscience division, the cage will then be opened and the gorillas will attempt to assist the synths in combating the Sole Survivor and whatever faction they chose to side with.

All ghoulrillas are passive by default, however attacking them will incite them to attack. Attacking Cito will also cause any ghoulrillas in Safari Adventure to attack the player character. Similarly, attacking The Pack will cause their ghoulrilla pets to attack.

The basic variant of the gorilla are made by the Institute and are the weakest variant in the game.

In Nuka-World, the player character can find that the pre-War gorillas in the Safari Adventure attraction have undergone ghoulification. The ones remaining there are trapped in a small shelter with Cito due to the gatorclaw population in the area. Some are located in the Pack headquarters, and are used as combatants in the arena, fighting against mole rats and other creatures.

The ghoulrilla king shares the same looks as the basic ghoulrilla but the king is more powerful and rare to spawn. It first spawns when the player character has reached beyond level 50 and hasn't yet completed the Safari Adventure quest. The ghoulrilla king's affiliation is to Cito and the king acts as the leader of the ghoulrilla group. Cito has named him 'Chris'.[1]

Found in the Bradberton Amphitheater, this ghoulrilla is used by The Pack as a combatant in their little arena. 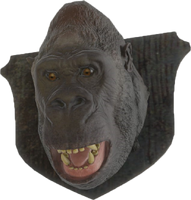 Gorilla synth in Bioscience
Add an image to this gallery

Retrieved from "https://fallout.fandom.com/wiki/Gorilla?oldid=3129514"
Community content is available under CC-BY-SA unless otherwise noted.