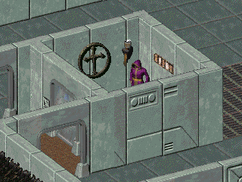 “We do not know what became of our savior, but he, or she, lives on in our minds and hearts.”

Gordon is the keeper of a shrine dedicated to the Vault Dweller in Vault 13 in 2241.

Gordon is a lean man in long robes.[1] He was actually a Vault 13 resident prior to its occupation by intelligent deathclaws, leaving to visit the statue of the Vault Dweller in the NCR before the Enclave abducted the residents. Gordon returned to the vault to find the deathclaws but is convinced that they are not responsible for the kidnapping. He has continued to remain in the vault, dedicated to being a keeper of the shrine to the Vault Dweller.

Gordon appears only in Fallout 2. Like all of the other residents, Gordon will be killed by the Enclave unless the restoration patch is installed and Dr. Schreber is killed within two weeks of entering Vault 13.

Retrieved from "https://fallout.fandom.com/wiki/Gordon_(Vault_13)?oldid=3342459"
Community content is available under CC-BY-SA unless otherwise noted.