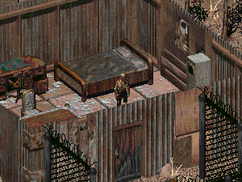 “I am greedy. But most people misunderstand greed. Greed is a powerful driving force. Throughout history, mankind's greatest achievements were driven by men that wanted to better their positions. Driven by greed. Greed, for lack of a better word, is good.”

Gordon of Gecko is a ghoul living in Gecko around 2241.

He is described as very nicely dressed with his hair slicked back.[1] He describes himself as greedy, although he adds that most people misunderstand greed, which is a powerful driving force. Gordon is a member of the Brain's Renewal cult and he has calculated that if the Gecko reactor was running properly, an enormous amount of power could be generated; far more than Gecko needs.

Retrieve the Economy Disk and deliver it to McClure in Vault City: He can give the Chosen One a holodisk with economic data to deliver to councilman McClure in Vault City which could ensure further cooperation between the two towns. This dialogue is triggered after talking to the Brain about optimizing the plant and having a Talisman in the inventory.

Gordon of Gecko appears only in Fallout 2.

Gordon "of Gecko" is clearly based on and a reference to the character of Gordon Gekko (played by Michael Douglas) from the film Wall Street, complete with his ideals of personal greed, style of dress and "greed is good" monologue.

Retrieved from "https://fallout.fandom.com/wiki/Gordon_(Gecko)?oldid=3341595"
Community content is available under CC-BY-SA unless otherwise noted.