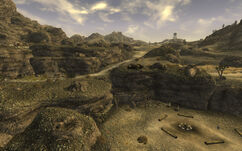 Back in the Saddle
Barton the Fink

“This here's Goodsprings. Named after the water we got here, just down the road to the southeast. Goodsprings Source, they call it.”— Doc Mitchell

The Goodsprings source is a location in the Mojave Wasteland. It is located south-southeast of Goodsprings and serves as its purified water supply.

The rocky terrain of this location separates its features into smaller sub-areas. There is a lower area consisting of a campground with a place to sleep, an upper area marked by several wells and water troughs, and an overlook that provides an overview of the other parts of Goodsprings source and the land beyond to the south. There are several containers of different types about the location which may be useful to loot early in the game.

In the lower area, there are three campfires that can be used to craft/cook various items. A man named Barton Thorn resides near the camper. He will attempt to mislead the Courier by asking for help saving his girlfriend from a group of geckos, when in reality he wants to safely reach the overlook where some loot is found.

In the upper area, some water wells and several geckos can be found. If the player character did not complete the quest By a Campfire on the Trail or if they failed to save the settler during the quest, the corpse of a Goodsprings settler can be found at one of the wells, carrying a cleaver, several caps and a field hand outfit. During the training mission with Sunny Smiles, this area is teeming with even more geckos than usual. A fully repaired shovel is next to one of the wells, slightly obscured by a bush.

The overlook area is initially overrun with a large number of geckos of various sizes, enough to overwhelm a low-level player character. The overlook is accessed by a path from the lower area near a broken radio tower. The path leads to the top of the ridge, where there is a small encampment. Several broc flowers can be found growing along the trail. In the area of the encampment, three bear traps have been set nearby to protect it. Some of the more notable camp furnishings include a refrigerator and some containers, while nearby is a dead prospector.

Player characters that have the Wild Wasteland trait will find the prospector's corpse replaced by that of a man named Johnny. Also added to the location of the corpse are four big red balls. Additionally, on the table, one will see four club aces and a fifth on the ground next to Johnny which appears to have fallen out of his sleeve or hand. The cards are only decorative and cannot be added to a Caravan deck.

The Goodsprings source appears only in Fallout: New Vegas.

Barton Thorn sleeping in the trailer

Johnny's dead body location
Add a photo to this gallery
Retrieved from "https://fallout.fandom.com/wiki/Goodsprings_source?oldid=3218340"
Community content is available under CC-BY-SA unless otherwise noted.