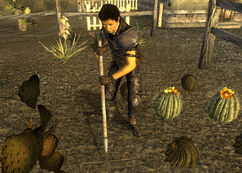 “Way too many strangers coming into town these days. No offense.”

Goodsprings settlers are people living in the town of Goodsprings in 2281.

The Goodsprings settlers are mainly farmers and ranchers, who specialize in working with brahmin and bighorners. They will greet the Courier with pleasantries, simple greetings, or comments regarding the town.

Other than the named Goodsprings inhabitants, there are a total of four Goodsprings settlers living in the town. Three are male and one is a female who lives with Trudy and Sunny Smiles. One lives in the house immediately west of Chet's shop, two live in the house in the middle of the town near Victor's shack and the schoolhouse, and the female settler can be rescued from geckos at the end of the tutorial quest Back in the Saddle, at which point she will live inside Sunny Smiles' house.

* Only by convincing Chet to equip the townspeople during Ghost Town Gunfight.

Goodsprings settlers will not respawn if killed, whether by the player character, the Powder Gangers, or any other wasteland threat.

Goodsprings settler in the Prospector Saloon

Goodsprings settler found near Goodsprings Source
Add a photo to this gallery
Retrieved from "https://fallout.fandom.com/wiki/Goodsprings_settler?oldid=3278335"
Community content is available under CC-BY-SA unless otherwise noted.