By a Campfire on the Trail 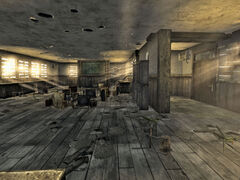 “But if you're up for a little scavenging, there's always the schoolhouse. Most of what's in there is junk, but there's this old safe that even Easy Pete wasn't able to crack with dynamite.”— Sunny Smiles

The Goodsprings schoolhouse is surrounded by a broken fence and has two entrances, the front entrance and the side entrance near the tree stump. Near the east entrance two xander root plants grow near the tree stump (a third is added along with two giant mantis nymphs during the quest By a Campfire on the Trail).

There are five giant mantis nymphs inhabiting the building. There are also a pair of egg sacks which may spawn more mantis nymphs if shot and destroyed. The schoolhouse itself is filled with toppled desks, lockers, and assorted debris. In the back of the school, there is a long counter on which is a footlocker, toolbox, and an Easy locked terminal. On the floor near the terminal is an Easy locked safe. The safe can be opened via lockpicking or by hacking the terminal.

The Goodsprings schoolhouse appears only in Fallout: New Vegas.