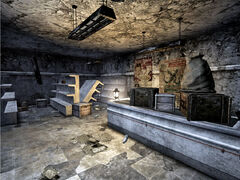 Interior of the gas station

“About a week ago, this trader, Ringo, comes into town. Survivor of an attack, he says. Bad men after him, needs a place to hide.”— Trudy

The Goodsprings gas station is a building located within the town of Goodsprings in the Mojave Wasteland in 2281. The Courier meets Ringo in this location, who is on the run from Joe Cobb and the Powder Gangers.

Outside of the gas station are a simple drive-in garage, a Poseidon Energy station sign and a Sunset Sarsaparilla vending machine. Inside the gas station, the Courier will predominantly find knocked over shelves stocked with various loot.

The store counter has several crates and sacks which can all be looted with no Karma loss. There is also a usable bed behind the store counter, along with an Easy locked floor safe, half covered by the mattress.

The Goodsprings gas station appears only in Fallout: New Vegas.