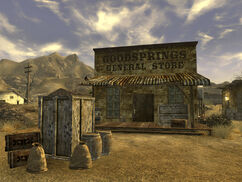 Chet's little shop seen from inside

“Well, there's a general store just up the road. Run by a fella named Chet. He don't got nothing fancy, but he's got your basics covered.”— Doc Mitchell

The Goodsprings General Store is the general supply shop for Goodsprings in 2281. Chet runs the place and sells guns, armor, weapon mods, and other basic items.

Outside the front entrance is a Mojave Express dropbox. When the Courier enters the building, there will be two small pillar-like bookshelves in the main room, along with some shelves and a small back room. An armor chest can be found by the bottom of the counter.

The Goodsprings General Store appears only in Fallout: New Vegas.

The Goodsprings General Store is based on the real world location of the same name in the town of Goodsprings, Nevada. The location was renamed "Ghost Town Cafe" in 2017, although the welcome sign still reads "Goodsprings General Store." The details of the real world location are similar to those seen in-game, including the layout of the store, proximity to the saloon, design of the ceiling and walls, the shape of the building, and external signage.

Frontal view with the Mojave Express dropbox seen on the left
Add a photo to this gallery
Retrieved from "https://fallout.fandom.com/wiki/Goodsprings_General_Store?oldid=3278394"
Community content is available under CC-BY-SA unless otherwise noted.