Ain't That a Kick in the Head
Back in the Saddle
They Went That-A-Way
By a Campfire on the Trail
Ghost Town Gunfight
Run Goodsprings Run
Ringo's Caravan Rules
Trudy's Radio Repair
We Must Stop Meeting Like This, I
We Must Stop Beating Like This
Exhumin' Nature
Barton the Fink

Goodsprings is a location in the Mojave Wasteland. It is where the Courier recovers from being shot in the head, after being rescued by Victor and "Patched up" at Doc Mitchell's House.

Before the Great War, Goodsprings was a "living ghost town", an old mining community from the early days of the United States of America. Abandoned in the aftermath of Armageddon, it was resettled relatively recently by citizens looking to stay out of the way of big world troubles and many wanting to remain seperate from the NCR.

Other than a recent lack of trade, Goodsprings struggles with two major problems. First, the powder gangers, led by Joe Cobb, are a group of convicts who recently escaped from the nearby NCR Correctional Facility. The disgruntled "Gangers" are attempting to locate and kill a Crimson Caravan merchant named Ringo, and are willing to ransack the entire town to find him. Second, geckos are constantly finding their way into town, dipping from its water supply and occasionally attacking residents and bighorners, which provide the town's main source of income.

Chet runs the Goodsprings General Store, doing most of his business with traders that come into town looking for meat and hides and the occasional traveler in desperate need of supplies. Trudy runs the Prospector Saloon, and is referred to as the "Town Mom" by Sunny Smiles. 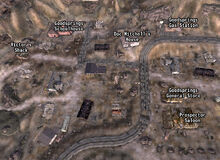 Doc Mitchell's House is located in the west. The Prospector Saloon and Goodsprings General Store with a Mojave Express dropbox located outside are to the north. Several settlers live in the town's houses.

There are three locations in Goodsprings which can be used for safe storage. Everything in Doc Mitchell's house is considered unowned, except the bed. Victor's shack is also considered unowned, but has few storage containers. The house due south of the Saloon is the most convenient, as it is the closest to the fast travel point. It has open beds and safe containers. Easy Pete sleeps there nightly, and a settler may wander in, but one bed is usually free.

Goodsprings contains an abandoned schoolhouse with some loot. An abandoned gas station west of Doc Mitchell's house contains some minor loot and can be used as a safehouse, as it contains a bed and safe storage, but it is locked until the Courier goes there to meet Ringo.

Add an image to this gallery
Retrieved from "https://fallout.fandom.com/wiki/Goodsprings?oldid=986467"
Community content is available under CC-BY-SA unless otherwise noted.