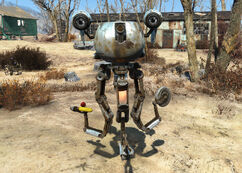 Professor Goodfeels is a Mister Handy robot wandering around the Sunshine Tidings Co-op in 2287.

Liberated by two men, Jack and Johnny, prior to the Great War. As it attempted to return to its owners, Johnny "noodled" it out and "zonked" its protocols to "just be."[1]

Professor Goodfeels can be found scouting the area around Sunshine Tidings Co-op. It can be reprogrammed by the player character to perform various actions. This Mister Handy is in poor condition, its rusty case dented and missing an eye stalk and several panels.

Professor Goodfeels appears only in Fallout 4.

Retrieved from "https://fallout.fandom.com/wiki/Goodfeels?oldid=3398325"
Community content is available under CC-BY-SA unless otherwise noted.