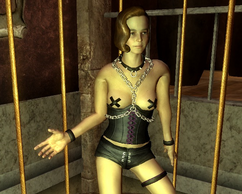 “I wouldn't mind taking a bite of you.”

Gomorrah prostitutes are prostitutes employed by the Omertas, who run the Gomorrah casino in 2281.

The prostitutes are both male or female, as well as human or ghoul. They are seen dancing seductively in cages tied on the ceiling and make a living dancing and providing sexual favors for customers.

The Courier can speak to Sweetie in Westside's Casa Madrid Apartments about the casino, and she reveals that the prostitutes are being forced to work against their will. She got her start at Gomorrah, but saw that the Omertas are intentionally causing chem addiction in girls by providing free Jet or Med-X, and then when they are fully addicted to the drugs, start charging. Sweetie describes their ploy as, "slavery through a needle."[1] Not only do they have to serve as a stripper in the Gomorrah's club, Brimstone, and also the courtyard, but they have to provide sexual favors for anyone who pays.

Retrieved from "https://fallout.fandom.com/wiki/Gomorrah_prostitute?oldid=3240658"
Community content is available under CC-BY-SA unless otherwise noted.