The Gomorrah courtyard is a location within Gomorrah on the New Vegas Strip in 2281.

The courtyard is an open area surrounded by small, individual huts and rooms. The courtyard has a shallow pool in the center, as well as palm trees and other vegetation.

The first time the player character enters the area, they will encounter Joana immediately, who is central to the quest Bye Bye Love. Later she may be found in her room or dancing in one of the courtyard's corners. Dazzle can be found in a hut on the main level, past where Joana is first encountered.

A variety of prostitutes dance and walk around the area, but only Joana and Dazzle can be engaged in extended conversation or solicited for sex. On the second level, just to the right of the door as the player character enters, is the door to Joana's room.

The Gomorrah courtyard appears only in Fallout: New Vegas. 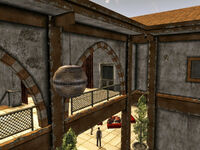 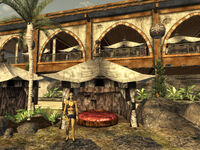