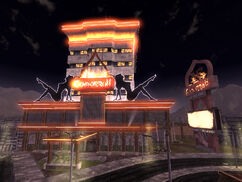 "Serenity / Dream Town"
“This program was brought to you by Gomorrah. Gomorrah. It'll be our secret.”— Mr. New Vegas, Fallout: New Vegas

Gomorrah is a casino on the New Vegas Strip. It is a favorite of NCR troopers, who often gather in large numbers outside. The casino is managed by the Omertas, a shadowy gang of racketeers.

“The Omerta family sells a variety of services and delights to its patrons at Gomorrah, but most visitors are there for one thing: sex.”— Fallout: New Vegas loading screen

Where The Strip’s other casinos are refined, the Gomorrah is rough around the edges and coarse, as it offers sleazy sex for sale. Top of the attractions list is prostitution, then booze and drugs, and finally gambling. The casino’s entire theme is of excessive debauchery. Unlike other more "classy" casinos, Gomorrah is the only one to be ghoul friendly, even having ghoul bartenders & prostitutes, as well as even offering services to ghouls. Unknown to everyone else on The Strip (although Mr. House has some idea), the head of the Gomorrah, Nero, may be orchestrating a racket with unknown parties.[1]

There are four main areas that have loading screens between them: the main level, the lower level, the courtyard, and the suites level.

Just inside the lobby entrance is the casino floor, with casino games in the middle and the bank to the left for changing money. In the back left is the entrance to the Brimstone lounge. In the back right is the main elevator bank. The elevators go down to the lower lobby, or up to the suites level. Going to the suites level requires picking a very hard lock (or obtaining a Zoara Club key).

This club houses a bar, a listless dancer on a stage, and not much else. Cachino, a major player in the How Little We Know quest, can usually be found in the Brimstone main level during normal hours. At night he sometimes returns to his room on the suites level.

This small VIP lounge overlooks the main Brimstone club. It contains a few pool tables, another bar, and the private offices of the head of the Omertas, Nero, and his right-hand man, Big Sal. The doors to both offices are locked (very hard).

The hallway behind the Zoara Club usually holds Big Sal (if he's not in his room), and sometimes Nero.

This open-air courtyard has a variety of tents where customers can presumably spend private time with the men and women (both human and ghoul) who circulate around in skimpy outfits offering dances and bedroom activities.

This level contains a maze of rooms and corridors, including:

There are Omerta thugs hanging around in most of the hallways; with judicious sneaking, however, all doors can be unlocked without much risk of detection. Clanden will not mind the player barging in and talking to him, but if Nero, Big Sal, or Cachino are in their respective suites when the player enters, they will usually turn hostile (unless the player has already gotten on good terms with them during the How Little We Know quest).

As the player earns poker chips, the casino offers increasing comps and gifts:

After the player earns 9,000+ chips, they are permanently banned from playing games in the casino. They can still use its other functions, such as the restaurant and cashing out their chips, but they cannot win any more money. If the player breaks the house limit before being given any comps (i.e., by winning an unusually large amount in one game), they will not receive any comps that they missed.

The piped-in music used in the lobby and club areas consists of the following tracks: 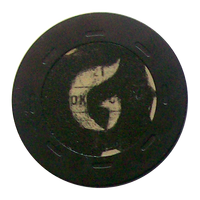 A newspaper article about the Gomorrah

The Gomorrah in the introduction scene 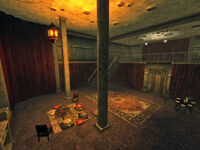 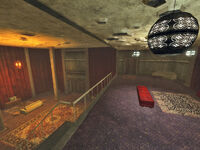 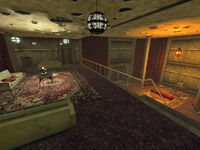 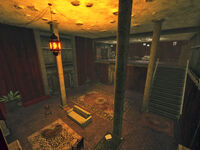 Concept art by Joe Sanabria
Add an image to this gallery

Retrieved from "https://fallout.fandom.com/wiki/Gomorrah?oldid=2613053"
Community content is available under CC-BY-SA unless otherwise noted.