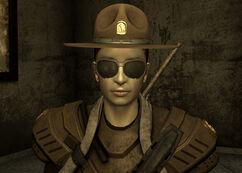 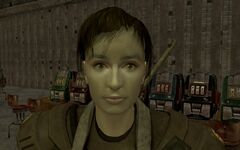 Gomez without her headgear

Gomez has a small bit of unique dialogue relating to Camp McCarran. These dialogue files tie her to the I Put a Spell on You quest as the monorail guard where she does or does not allow the Courier access to it.

Ranger Gomez was set to appear in Fallout: New Vegas but was cut from the game.

Retrieved from "https://fallout.fandom.com/wiki/Gomez_(Camp_McCarran)?oldid=2094601"
Community content is available under CC-BY-SA unless otherwise noted.