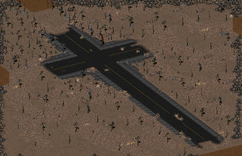 Track down Pretty Boy Lloyd, recover the stolen money, and make an... example of him
Find out who was responsible for Richard Wright's overdose

Play sound
City of Lost Angels.ogg
“Yeah, this graveyard outside o' town. It's where they put debtors and people who've crossed the families. They just string 'em up on posts and let 'em die slowly in the sun. Not my choice a' dying. Stinks like hell out there.”— Jules

Golgotha is the graveyard outside of New Reno, where people are sent to die. It is also the burial grounds of those who are killed when they fall out of favor with one of the mob families in New Reno.[1]

Graves lie to all four sides of paved crossroads, and staked bodies rot in the sun. A sign points northwest to New Reno and down, conveniently indicating the direction of Hell.

Golgotha cannot naturally be revealed on the map, and there are only three ways to get its location:

Imagine the crossed street of Golgotha as a grid read like a book, left to right top to bottom. Northwest will be grid "A," northeast will be grid "B," southwest is "C" and southeast is "D."

Golgotha appears only in Fallout 2, but it's mentioned by Stella in the Fallout: New Vegas add-on Honest Hearts.

In Christianity, the mountain where Jesus was crucified is also named Golgotha, a Greek word meaning "place of the skull," and the rest of the road in Golgotha forms a cross.

Retrieved from "https://fallout.fandom.com/wiki/Golgotha?oldid=3470571"
Community content is available under CC-BY-SA unless otherwise noted.