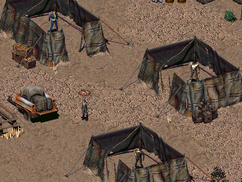 “I'm Ben Wade\Enrico Savinelli\Stanwell. I run the caravan between Redding and the Vault City\New Reno\New California Republic. Brahmin for gold. We could use an extra guard, and we're ready to leave right now.”

Golden Trail is a quest in Fallout 2.

Mined in Redding, gold is a commodity sought by the three major powers in the wasteland: Vault City, New Reno and the NCR. Caravans carrying it (and goods traded for it) are a common sight in the wasteland, as are the heavily armed escorts accompanying them. This quest allows the player character to participate in such a caravan route. Here is the rundown:

Sounds simple enough, but a few things complicate the matter:

Arriving at the destination will result in a success on the caravan and payout, with each killed brahmin impacting the wages, which can go as low as 500$ (and a ban from caravan running). Flawless performance will net a 500$ bonus.

If the leader dies, a stand-in will appear at the destination to dole out the player character wages. However, the caravan route will be considered dead for future employment.

Retrieved from "https://fallout.fandom.com/wiki/Golden_Trail?oldid=3264861"
Community content is available under CC-BY-SA unless otherwise noted.