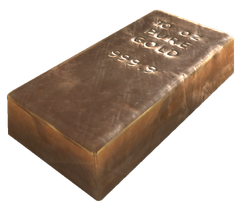 The Courier can find 37 gold bars in the Sierra Madre vault, which is accessible only during the quest Heist of the Centuries. Due to their tremendous weight and the script of the final questline, it is difficult, but not impossible, to retrieve them all.

There are 36 gold bars on a table to the right as the player character opens the vault door together with some pre-War money and Sierra Madre chips, and the 37th is on the desk near the vault control terminal.

36 of the gold bars in the vault, along with several stacks of pre-War money and Sierra Madre chips.
Add an image to this gallery
Retrieved from "https://fallout.fandom.com/wiki/Gold_bar_(Dead_Money)?oldid=3331343"
Community content is available under CC-BY-SA unless otherwise noted.