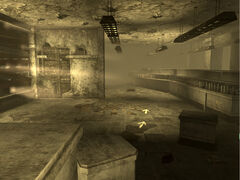 The entire store appears to have been set up as a Rube Goldberg machine, using pressure plates, a long row of boxes, a pitching machine, a bear trap, a bouquet of frag grenades and explosions. Successfully causing the contraption to ignite the gas leak will cause items to drop from the southwestern hole in the ceiling.

The set up is intended to be started by standing on the southwestern pressure plate (the one with several arrows around it, all pointing to it). Triggering the pressure plate causes a log with a brahmin skull on it to swing loose from the ceiling and hit the first of a long row of boxes on a shelf. The boxes will topple into each other like dominoes, with the last box falling off the shelf and onto the second pressure plate. That pressure plate will trigger a pitching machine. The pitching machine will fire baseballs that knock a pot, a bucket and finally a precariously balanced fire extinguisher over. The fire extinguisher will fall onto a bear trap and explode. The gas cylinder explosion will cause the grenade bouquet to fall, eventually exploding to ignite the gas leak, thereby causing a skeleton and some loot to drop from the southwestern ceiling hole onto the ground. Approaching the back half of the store before the gas leak ignites may lead to the player taking damage from the explosion.

The slider on the upper level, containing the loot