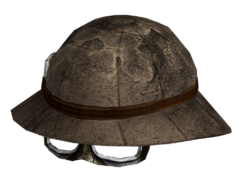 Goggles helmet is a piece of headwear in Fallout: New Vegas.

It is a dull brown helmet identical to the trooper helmet, except with the pair of goggles pulled down over the wearer's eyes. It provides a Damage Threshold of 2.

The helmet appears to be influenced by both the Brodie helmet, as used by most Americans and British commonwealths in World War I, and wide-brimmed pith helmets, used before, during, and after the same time period.

Retrieved from "https://fallout.fandom.com/wiki/Goggles_helmet?oldid=3432965"
Community content is available under CC-BY-SA unless otherwise noted.