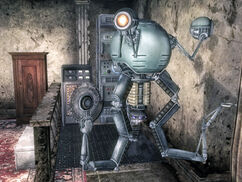 “Two atoms are in a bar. One says, 'I think I've lost an electron.' The other asks, 'Are you sure?' To which the first replies, 'I'm positive.”

Godfrey is a Mister Handy that can become the Lone Wanderer's personal robot butler in the Tenpenny Tower suite in 2277.

For those discerning types, choosing the right robotic butler is simply a matter of class. Enter Godfrey, the perfect mechanized butler, with many exciting features, such as water purification, follicle-shortening, and just the right type of mirth programming. To wit: "I was going to the clairvoyance meeting, but it was canceled due to unforeseen events." Your perfect plastic pal is fun to be with.[1]

Godfrey stays in the Lone Wanderer's Tenpenny tower suite at all times, randomly moving around.

Godfrey appears only in Fallout 3.

The joke, "Two cannibals are eating a clown. One turns to the other and says, 'Does this taste funny to you?'" was also told by a servant robot named 'Andrew' (Robin Williams) in the movie Bicentennial Man, and is originally by Tommy Cooper.

Retrieved from "https://fallout.fandom.com/wiki/Godfrey?oldid=3271087"
Community content is available under CC-BY-SA unless otherwise noted.