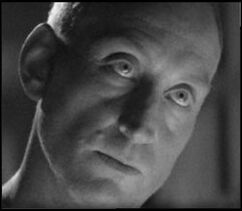 Leader of the Boulder scientists

“We're suited up to protect you, not us.”

Goddard is the leader of a group of scientists in the Boulder Dome in 2253.

In 2247, Goddard was a former NCR scientist and an adviser to President Tandi. He was found to be bothersome, so Tandi assigned him to study old-world power and establish reactors in the eastern territories (see: Southwestern Commonwealth). The job required him to be accompanied by a military escort for his safety. When he returned from exploring, he was again tasked by Victor Presper with searching the south-west region of the U.S. for more information about functioning pre-War power facilities. He sent back reports of promising locations he discovered during the voyages.

His main priority is attending to the "dying" ZAX supercomputer, located in the bottom of the Dome. When he's not worrying about ZAX, he still has lots of repairs to keep him busy. No one is sure how long he will be able to continue his work in the Dome with his current levels of stress. Presper was particularly interested in his report of the Boulder Dome, so he sent a team of soldiers to investigate it's interior. Later, Presper inhabits the Dome with teams of scientists from NCR. Further on, in 2250, Goddard meets another NCR scientist named Agnes at the Hoover Dam. Knowing they could not go back to NCR due to violent conflicts, the two went to the Boulder Dome by means of the trucker Eddie Galenski. Upon arrival, he realized that a few of Presper's scientists were infected with the New Plague, and had quarantined themselves from him with environmental suits. He believes ZAX holds the key to creating an antigen for the virus, but with a lack of a real workforce, the Dome itself is barely under working order.[1]

She is one of the only other scientists he trusts. They don't have any sort of attraction to each other, but Agnes cares for him, and he confides in her about the idea of locking the Baggers out of the dome.[1]

So far, he is unaware of Nina's dependency on him as a "father figure", and now that she's comatose, he's more irritated by her presence than anything else. He almost wishes she would choose to die one way or the other so Agnes could spend more time on other matters; he realizes that he can't say this because of the reactions it would draw from others, but he's definitely thought about it more than once.[1]

Paul irritates him with his quirks. He knows the guy is smart but doesn't trust him to do complicated tasks.[1]

He doesn't like Xian, mainly because he feels she isn't focused enough on the group and working as a team. He thinks she's just a stubborn kid who shouldn't be a scientist. Plus, she likes to challenge his decisions.[1]

He didn't like Larsen because he questioned his orders. Mostly, he's upset that he tried to solve the problem by exiling them and it only made it worse. Even more ironic, he's now frustrated that they don't have the soldiers around to help out.[1]

He thinks they're dumb-heads that are only good for doing grunt work. Truthfully, he considers the kids to be a liability, but Agnes told him to never say that in front of the truckers. He doesn't realize that Eddie would be happy to punch his lights out.[1]

Goddard never has real conversations with most anybody, the player included. His objective is to keep the Boulder Dome in working order, and he finds talking is a waste when there are repairs to be made. He was to be the initiator of most of the repair/scavenging quests associated with Boulder.[1]

Otherwise, his interactions are vaguely outlined in a few dialogue pieces.

Goddard has not appeared nor is he mentioned in any published game. Goddard was to appear in Van Buren, the canceled Fallout 3 project by Black Isle Studios. It is not certain if he will appear in any future Fallout game.

Retrieved from "https://fallout.fandom.com/wiki/Goddard?oldid=3123928"
Community content is available under CC-BY-SA unless otherwise noted.