The Gobi Campaign scout rifle is a unique weapon in Fallout: New Vegas.

The Gobi Campaign scout rifle is a unique sniper rifle that was used by the United States Armed Forces in the Gobi Desert military campaign in China before the Great War. The scout rifle is coated in a desert camouflage with a black rubber eye-piece on the scope and comes pre-equipped with an extended magazine, a slightly shorter barrel and a maintenance kit stored in the stock.[1] Its condition deteriorates slower than standard sniper rifles.

Like most unique weapons, it cannot be modified with a suppressor or carbon fiber parts.

Compared to a normal sniper rifle, the Gobi Campaign scout rifle does slightly more damage, has a higher DPS, has a lower weapons spread, fires more rapidly, degrades slower and has greatly increased critical hit damage. Its reduced Action Points cost can also be very useful for squeezing an extra shot into a V.A.T.S. sequence. However, the major downsides are that it cannot be suppressed, and weapons to repair it are severely limited without the Jury Rigging perk.

The Gobi Campaign scout rifle can fire a total of about 795 standard rounds, the equivalent of 133 reloads, from full condition before breaking.

Sniper's nest - Found in the Very Hard-locked gun case that is next to an ammunition crate with .308 rounds. There is no key to open it if the lock breaks.

The magnification level of the scope is 3.5x for this weapon. 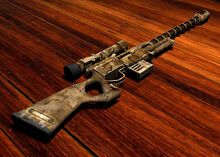 The rifle at the Sniper's nest