Helps Friends and Allies
“Listen... Moriarty'd have my head if he caught me selling at a discount, but for you, I'll risk it.”

Gobtholemew "Gob"[Non-game 1] is an abused ghoul bartender who works at Moriarty's Saloon in Megaton in the year 2277.

Treated as a freakish, second-class citizen by many people in Megaton (particularly Colin Moriarty), Gob is skittish and nervous, always looking over his shoulder. He does his best to maintain a sense of humor and to be friendly with customers, but this is mostly out of his desire not to be beaten. Confessor Cromwell and Mother Maya treat Gob with respect and an air of reverence because of their spiritual beliefs.[Non-game 2]

Gob used to live in Underworld with his adoptive "mother," Carol, in Carol's Place. He set out into the wasteland to find fortune and was caught by a group of slavers. Colin Moriarty then purchased him as his slave. He works for Colin Moriarty to repay the debt presumably incurred when Moriarty purchased Gob from the slavers. Gob has been working to repay his debt for 15 years, since Moriarty also charges Gob for rent and food.[1][2][3][4]

Gob spends most of his time serving drinks and talking with the patrons in Moriarty's saloon. At night, he'll eventually go to sleep in the rentable room, sometimes resting for a few hours and then starting up the saloon in the early morning hours. During his working hours, he'll be cleaning glasses, communicating with people ("What, you never seen a ghoul before?"), tidying up the place with a dirty broom and checking the shelves behind the counter to see what's currently in stock. The first time the Lone Wanderer enters the saloon, Gob will be hitting the radio, trying to fix it. Nova tries to explain to him it doesn't work, and Jericho (if he is present) will curse at him to stop banging on it. Also, if Walter is present he will remark to Gob to stop hitting the radio as he finds the Enclave radio "downright patriotic," even though Enclave radio is not playing. After the player completes the Galaxy News Radio quest, the radio will function properly, though Gob will never comment on its improvement.

Gob appears only in Fallout 3. 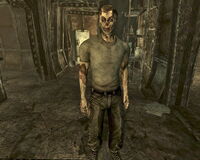 "What's the matter, never saw a ghoul before?"

Gob and Nova in an endings slide