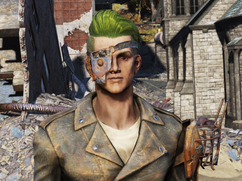 Gnash is a raider in Appalachia in 2103.

Gnash was originally affiliated with the group of raiders at the Crater, until he eventually left because he believed Meg Groberg was getting soft.[1] Gnash also wanted to survey the damage caused by the Christmas Flood in Charleston.

He is living in a fortified shed, southeast of the Hornwright Industrial Headquarters map marker.

Gnash appears only in Fallout 76, introduced in the Wastelanders update.

Retrieved from "https://fallout.fandom.com/wiki/Gnash?oldid=3436852"
Community content is available under CC-BY-SA unless otherwise noted.