Glowing resin is a consumable item in Fallout 76.

Glowing resin is an amber-colored bioluminescent sap that is found on the sides of various trees. It can be consumed raw to satisfy a small amount of hunger with a medium dose of radiation and a chance for disease or can be cooked for additional benefits.

When affected by a blast zone, glowing resin will turn into a glowing blue gloam sap which can be harvested for raw cobalt flux.

Predominantly found on the sides of trees in the Savage Divide and in the following locations:

It can also be found as bottles in the following locations:

Glowing resin in the wild

Gloam sap in a nuke zone 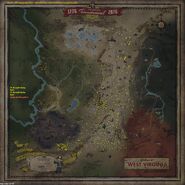