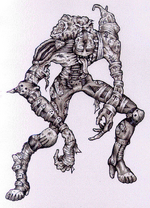 Glowing ones are creatures in Fallout: Brotherhood of Steel.

In Los, the glowing ghouls are among the members of the Church of the Lost, a ghoul cult dedicated to protection of the Secret Vault. Interestingly, they are less affected by radiation than their comrades from the Capital Wasteland and the West Coast's Core Region.

Like a nightlight from hell, glowing ghouls illuminate the cityscape with their irradiated bodies. You'll encounter these fluorescent foes around radiation pools and sewage pipes. Don't get too close, as one touch gives you radiation poisoning.

Most notably found in Los, on the Bridge and also on the Docks and warehouse district.

Glowing ones appear in Fallout: Brotherhood of Steel.

Retrieved from "https://fallout.fandom.com/wiki/Glowing_one_(Fallout:_Brotherhood_of_Steel)?oldid=2199483"
Community content is available under CC-BY-SA unless otherwise noted.