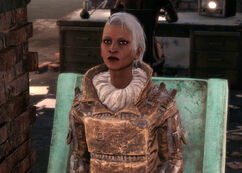 “The world's a dangerous place... for anyone in my way. Heh.”

Glory, originally G7-81, is a synth member of the Railroad in 2287. She is a "heavy" for the Railroad, sent on their most dangerous and combat-heavy missions. Despite this, she prefers not to engage in assignments where she must kill synths, even Generation 1 or 2 models.

In 2280, Glory was known as G7-81 and was one of many synths rescued by the Railroad. Unlike most synths who are traumatized and go through a memory wipe procedure, she opted out and begged to join the Railroad. She initially worked with High Rise at Ticonderoga, but was eventually called into the Railroad HQ and promoted to a heavy agent in the same year. She took Tommy Whispers under her wing in 2281 and trained him into becoming a heavy agent.

If spoken to during the initial meeting with the Railroad leaders after Emergent Behavior has been completed, she will mention that G5-19 - the brain-dead synth whose body is now Curie's - was like family to her and that she should have refused to allow her body to be donated to Curie. She can be persuaded that Curie's scientific skills will be a big help, though she does not seem particularly convinced.

Unlike some of the other members of the Railroad, Glory feels that even the primitive Generation 1 synths deserve to be freed from Institute control. She shares her opinion on this matter with the Sole Survivor during the mission Memory Interrupted, when she's forced to fight against several Generation 1 synths.

Glory appears only in Fallout 4.

When first talked to after completing the Freedom Trail, Glory compliments the Sole Survivor by saying their work on the trail was "Not bad. For a human, that is." This is a reference to a very similar compliment the synthetic Bishop gives Ellen Ripley in the movie Aliens.[1]

Retrieved from "https://fallout.fandom.com/wiki/Glory?oldid=3416041"
Community content is available under CC-BY-SA unless otherwise noted.
... more about "Glory"
RDF feed
Has platform
PC +, Playstation 4 +  and Xbox One +