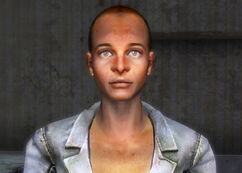 “Caesar has been making overtures to prominent suppliers for some time now. Usually, they're too scared of him to cross him and just pay or flee. I saw an opportunity and negotiated a deal with the NCR - I help draw some of their enemy's troops into a trap and they agree to buy from me. Normally, those stuck-up bastards wouldn't have anything to do with us, but their situation is precarious, and this chance was too tempting.”

Gloria Van Graff, or simply Glory by her half-brother, is the head of the Van Graff family in New Vegas and manager of the Silver Rush energy weapons store in 2281.

Gloria is the ambitious daughter of the Van Graff matriarch, who has expanded her family's operations into the Mojave Wasteland (largely because she did not get along with her parents).[1] She is a firm believer in the rule that might makes right and regularly practices it. The first opportunity to do so came when the Van Graffs first came to Freeside in 2276. The Van Graffs took over the dilapidated Silver Rush casino. When the Kings protested, plasma weapons caused them to withdraw the objections, leaving the family free to ply their trade.[2] Gloria quickly set about entrenching her position, openly trading energy Weapons to her customers. This attracted the attention of the Brotherhood, the only thing saving her skin being Elder Elijah's preoccupation with HELIOS One.[3]

Her general strategy is to maximize profits through official and unofficial deals, as well as undercutting the competition.[4] To this end, she has formed a covert alliance with Alice McLafferty: In return for hitting competing caravan outfits, like Durable Dunn's or Cassidy Caravans, staging them as Brotherhood attacks, the Crimson Caravan Company would undermine the Gun Runners' market share, motivating clients to deal with the Van Graffs instead.[5]

Of course, Gloria has bigger ambitions. As the Legion was making entreaties towards traders in the Mojave, she contacted one of their representatives and agreed to provide them with energy weapons.[6] Unbeknownst to the Legion, the deal was actually a set-up: Gloria has negotiated a deal with the NCR. She would draw the Legion's representatives into a trap laid by the army, and the army would start purchasing weapons from her in return.[7] This allowed her to overcome the hostility of the republic to her family, earning her not only a big defense contract, but also connections in the NCR which could be leveraged to the further benefit of the family.[8] If anything, the fact that she made five times more money on selling out the Legion to the Republic than dealing weapons to them and kept the Legion's payment as a bonus will make her mother listen.[9]

Gloria is a passionate woman and has been known to have held intimate relationships with Kings member Pacer and with a former Van Graff employee Jacob. Both have ended on less than amicable terms. Other than those two relationships, Gloria has been known to sleep with many employees of the Van Graffs'; so much so that her mother has told her to not "tip the help."[10]

Pacer's relationship with Gloria, while never mentioned in-depth, is reason enough for Pacer to nose around in the business of the Van Graffs. Pacer often harasses Simon during his shift, but an action like that could easily result in an easy and well-disguised political assassination.

The other relationship with Jacob was as straight forward as could be with the power dynamic between manager and employee. Gloria had admitted to Jacob that she gets easily jealous and would only entertain the relationship if he stayed loyal to her. While Jacob promised to do so, he was later caught by Gloria at Gomorrah being serviced by one of their prostitutes.[11] She would then kidnap Jacob and use him for target practice of the efficiency of Van Graff weapons.[12]