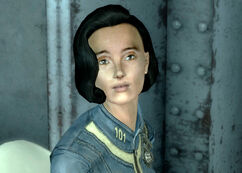 Gloria is Allen Mack's wife; Wally, Steve, and Susie's mother; and Mary Kendall and Beatrice Armstrong's sister. She is a stoic and sometimes calming influence on her family, and she readies herself for a possible security officer position should Vault 101 become compromised.[1]

During "Escape!" she can be seen sitting at the table behind Allen Mack through the window he taunts the Lone Wanderer through.

Gloria Mack appears only in Fallout 3.

}
Retrieved from "https://fallout.fandom.com/wiki/Gloria_Mack?oldid=3314191"
Community content is available under CC-BY-SA unless otherwise noted.