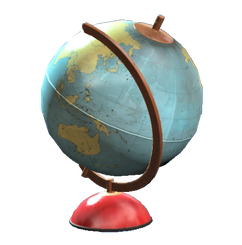 Globes are junk items in Fallout 4.

There are some errors on the map. The map is not consistent with the Fallout timeline. Most notably is that the United States and Canada are seperate. The European borders are drawn out as in the real world. The Soviet Union, which in the Fallout timeline, did not collapse in the 20th century, is also split into each of the seperate former-Soviet states. The Mediterranean and Black Seas are colored in as if they are land masses, and not bodies of water. Finally, China also taken over much of the rest of the far-eastern territory not claimed by the USSR.

One can be found in the Sole Survivors old home in Sanctuary Hills on the floor.

Retrieved from "https://fallout.fandom.com/wiki/Globe_(Fallout_4)?oldid=2529081"
Community content is available under CC-BY-SA unless otherwise noted.