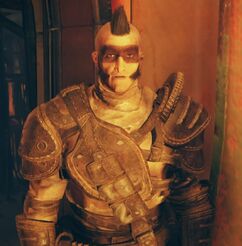 “Stand down, slave. It'd be a shame if you were to get injured before your next fight.”

Glenn, initially known as simply the arena guard, is a member of Sargento's gang at the Watoga Civic Center in Appalachia in 2103.

Glenn was born in 2075. He claims he always hated his name, though he does not wish to change it, out of respect for his deceased parents.[1] After the war, Glenn met Sargento in the Capital Wasteland while trying to rob his gang. This landed the two in a fist fight. Though Sargento won the fight, he was impressed with Glenn and offered him a job as a caravan guard.[2]

After the founding of the arena at the Civic Center, Glenn transitioned to being a guard there. He claims to not be very fond of family, and as such does not have a wife or children. He claims that his job is very boring, but also suggests there are some fights he rather enjoys. One fight in particular stands out to him; he claims a volunteer mounted a yao guai, before severing its head with some barbed wire. He admits he is saddened by the fact that she has not returned to put on another spectacle.[3]

The Ol' Weston Shuffle: During this quest, Glenn is first known as the "arena guard." He will tell the player character to enter the arena when it is their turn. If, before the final round, Johnny Weston convinces Maximum Maddie to throw the match, he will ask the player character to distract the arena guard. During this conversation, one can learn about the guard, including his name and his past. Once his name is learned and the conversation is ended, his in-game name will change from "arena guard" to "Glenn."

Glenn appears only in Fallout 76, introduced in the Wastelanders update.

Retrieved from "https://fallout.fandom.com/wiki/Glenn?oldid=3413676"
Community content is available under CC-BY-SA unless otherwise noted.