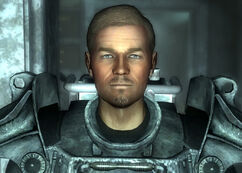 “Me? Heavy weapons. Miniguns, missile launchers... If it's bigger than a human and goes boom, I'm all over it.”

Paladin Glade is the heavy weapons expert of Lyons' Pride in 2277, and is located in the Citadel A ring.

Glade is the oldest member of the Lyons' Pride and serves as the group's technician and smith. It is also said that Glade is the most well-rounded and experienced paladin in the Pride.[1]

Paladin Glade appears only in Fallout 3.

Retrieved from "https://fallout.fandom.com/wiki/Glade?oldid=3369422"
Community content is available under CC-BY-SA unless otherwise noted.