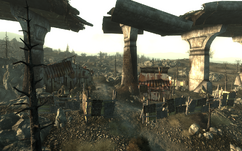 Girdershade is a tiny settlement in 2277. It is located in the far southwest of the Capital Wasteland, southwest of Evergreen Mills, with only two inhabitants and a brahmin.

Girdershade is a tiny settlement located under an overpass. It got its name from the broken-off portion of the bridge and the exposed girders: all that’s left of its superstructure. The population of Girdershade numbers two, Sierra Petrovita and Ronald Laren. They are both long-time residents of the settlement, Sierra as the "founder" of the place and Ronald occupying the second house after its original occupants were slain.[1]

Girdershade appears only in Fallout 3.

General view of Girdershade. In the background at the right of the image, we can see the Tenpenny Tower standing on the Capital Wasteland.

Nuka Cola signs in front of Sierra's house.
Add a photo to this gallery

Retrieved from "https://fallout.fandom.com/wiki/Girdershade?oldid=3336249"
Community content is available under CC-BY-SA unless otherwise noted.