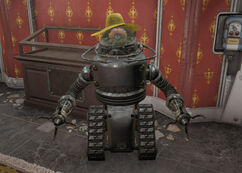 “Hey there, tiger. Here for more stories about my acting career or...something else?”

Gilda Broscoe is a robobrain in Vault 118 and a former Hollywood actress in 2287.

Once a redhead with movie star looks,[1] Gilda Broscoe was a famous actress before the Great War, acting in many movies. She also was in musicals when they were in fashion, such as The Beautiful Cigar Girl, Wagons on the Plain and A Woman of the Royal Navy.[2] According to her, Gilda would have gotten the leading female role in Love Sets Sail!, but Vera Keyes got it instead due to her uncle being the producer; for this, she holds a grudge against Ms. Keyes.[3] While on set, she was privy to many Hollywood scandals and rumors[4][5] and attended lavish Hollywood parties. She first met Keith McKinney when they co-starred in the major movie Empire on the Nile; she played Cleopatra VII Philopator and Keith played Marcus Antonius Creticus.[6] From then, she developed feelings towards him,[7] though this was an unrequited affair as Keith is homosexual and still in the closet. However, she refuses to acknowledge the situation,[8] believing it to be just part of the movie star life she chose.[9] She even went as far as trying to convince Keith that the feelings he had towards Ezra[10] were false.[11][12][13] Because she was embittered, she occasionally sought out affairs of her own. She once had an affair with Santiago Avida for "a few dozen years," though speaks very lightly about it,[14] mostly due to Santiago's obsessiveness, which she describes as even a little much for her.[15] With such surroundings for the past two centuries, she is quite desperate for attention and open to an affair with the Sole Survivor.[16][17][18]

Vault 118 and life as a robobrainEdit

Before the war, she along with the other denizens of Vault 118 were enticed by the privilege and exclusivity into accepting a paid spot in the vault by Ezra Parker. The deciding factor for her, however, wasn't the opulence, it was Keith's insistence, having fallen for Ezra's manipulations becoming its first investors.[10][19] Unbeknownst to them, it was an experiment by Vault-Tec[20][21][22][23] and a scam by Ezra.[24] Although she was taken for quite a large sum of money from Mr. Parker, this had the side effect of saving them all from the experiments that would have been conducted.[25]

It was here that she and the rest of the residents of Vault 118 were convinced to extend their lives by both Doctor Bert Riggs and his wife Julianna using Dr. Riggs' robobrain research.[26] This was successful, as she and the rest of the denizens of the vault survived for the next two centuries.[27] However, this was not without its side effects; one cost not readily apparent was derangement. Although Doctor Riggs was able to solve the problem of the robobrains losing their identity in his development, he was not able to save their sanity. She, like the rest of her compatriots of Vault 118, lost their sense of time, and their isolation helped them lose their sense of reality. Already having a high opinion of herself, she believed that once the Sino-American War was over, she would be able to return to acting and usher in a new golden age of cinema.[28] She, along with Keith, continued to practice their art long into the next few centuries.[29][30]

Brain Dead: Gilda can be interrogated on several subjects for the murder.

The Sole Survivor can flirt with Gilda through five speech checks, after which the two go on a lovers' date, resulting in the perk Lover's Embrace.

Gilda Broscoe appears only in the Fallout 4 add-on Far Harbor.

Retrieved from "https://fallout.fandom.com/wiki/Gilda_Broscoe?oldid=3336504"
Community content is available under CC-BY-SA unless otherwise noted.