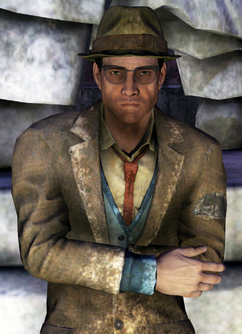 “Ah, what a magnificent place this once was. The very epicenter of learning here in Appalachia. Truly, nothing is as valuable as a good education.”— Gilbert Hopson

Gilbert Hopson is a former teacher from Monroe, Connecticut. He can be found in Appalachia in 2103.

Before the war, Gilbert taught high school history and literature, considering it a great joy, even if he taught only a few interested students.[1] He and his wife, Millicent, enjoyed Sunday bicycle rides and pint samplings at the local brewery.[2]

After the Great War, Millicent passed away, due to cancer likely caused by radiation. Due to her passing, Gilbert was left depressed, but decided to set himself on a mission. Once he had adapted to the post-War world, he decided to visit every great learning institution in America that remained intact, bringing him to VTU for the time being.[3]

Despite the rumors and controversies about the company and the nature of the Vaults, Gilbert considers the Vault-Tec Corporation to effectively be the saviors of the remnants of humanity, as Vaults allowed for rebuilding and survival, dismissing the rumors as normal for any large corporation. However, the one fault he has for the company lies in its corporate branding of the university.[4]

By 2103, Gilbert stands outside of the main building of Vault-Tec University near his camp, which is behind the VTU statue. He had met with the Vault 76 overseer recently, having a pleasant conversation with her, and is able to tell the player about it.[5]

If spoken to during the quest Overseer, Overseen, he will mention meeting the Vault 76 overseer and direct one to her location.[5]

Gilbert Hopson appears only in Fallout 76, introduced in the Wastelanders update.

Retrieved from "https://fallout.fandom.com/wiki/Gilbert_Hopson?oldid=3365237"
Community content is available under CC-BY-SA unless otherwise noted.