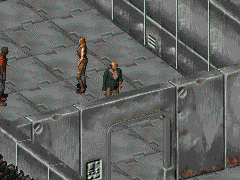 “There is only peace and joining.. the price.. the pain.. one must be blind.. nulled.”

Gideon is one of the four psykers, along with Moore, Wiggum, and Lucy, kept in the Master's Lair beneath the Cathedral.

Although he is decidedly insane, no doubt as a result of the Master's experiments with psychic powers in humans, Gideon is still the most comprehensible of the psykers, and the only one who can provide any real information. Gideon is very loyal to the Master, albeit in a rather delusional manner, and speaks very highly of him and his mission in his discussion with the Vault Dweller. He is described as a normal-looking human male, fitted with a psychic nullifier.

Gideon was a receiving-telepathic-dominant psyker with minor photo-kinetic abilities[1] (though this ability is never viewed in-game), and did not possess the ability to control his telepathy, which meant he required the psychic nullifier to block incoming thoughts. This would explain Gideon's link with the living walls in the Master's Lair. While the nullifier blocks the incoming thoughts, Gideon's hands still glow with the energy from his photo-kinetic abilities.[2]

Gideon appears only in Fallout and is mentioned in the Fallout Bible.

Retrieved from "https://fallout.fandom.com/wiki/Gideon?oldid=3460755"
Community content is available under CC-BY-SA unless otherwise noted.