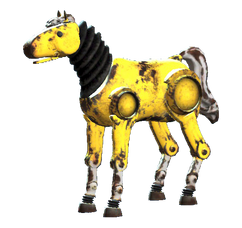 High Noon at the Gulch

Giddyup Buttercup is a junk item in Fallout 4. The item was originally included in Fallout 3, marketed as "the ultimate in equestrian robotics" before the Great War.

The Giddyup Buttercup is a rather small toy horse made of metal with peeling, well-worn paint. It can be scrapped for parts, proving to be a plentiful source of screws and steel. Various Giddyup Buttercup parts can also be found throughout the Commonwealth.

The Giddyup Buttercup can be broken down into its individual components for use in crafting: 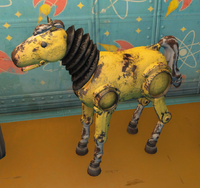 A Giddyup Buttercup as seen in a room in Vault 81
Add an image to this gallery
Retrieved from "https://fallout.fandom.com/wiki/Giddyup_Buttercup_(Fallout_4)?oldid=3268788"
Community content is available under CC-BY-SA unless otherwise noted.