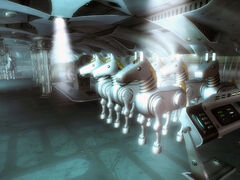 Giddyup Buttercups in the research lab

Giddyup Buttercup is the name of a robotic toy horse manufactured by Wilson Atomatoys before the Great War. Touted as the "ultimate in equestrian robotics," it was a toy aimed at a target audience of little girls with a cost of $16,000. A marketing poster featuring the horse is copyrighted 2042.

The aliens aboard Mothership Zeta possess a large number of them stacked on racks in the research lab. One particular observation room has a lone Buttercup in the center surrounded by five dead test subjects.[Non-canon 1]

Alien captive recorded log 21 features Sally being taken to the recording room and noticing a Giddyup Buttercup. The aliens are described as being excited, either by her recognition of it or by her happy reaction. If Paulson, Elliott Tercorien, or Somah are taken to the Buttercups in the research lab, they'll make comments about them.[1][2][3] 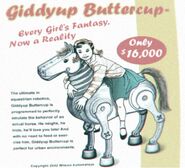