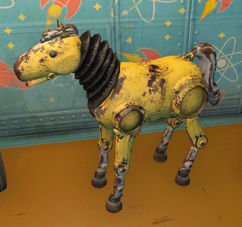 Giddyup 'n Go is a miscellaneous quest in Fallout 4.

To begin this quest, talk with Arlen Glass in The Slog and ask him for work. He'll express his interest in the toy Giddyup Buttercup and say he needs some spare parts, which can only be found in the Wilson Atomatoys factory, for his work on them. If asked for a reward, he'll offer a base payment of 150 caps and can be pushed into offering 225 or 300 caps with some speech checks. A third reward speech check, if passed, will give a Wilson Atomatoys ID card, used in the quest.

When you reach the factory, it's likely that the super mutants that inhabit the place and nearby Gunners will be battling each other. They and the super mutants located within will need to be fought through to retrieve the toy parts. A minigun wielding super mutant named Big Mack, leader of the small group, will also be found inside. Being so far south and right next to Quincy, this is a very dangerous area. Being a higher level and well-prepared is recommended when doing this quest.

After killing the mutants, head to a small room in the back of the factory with a door that requires an ID card to open. To get in the room with the quest parts, get the ID card located upstairs over at the right of the desk in the corner on the ground. One may also be found on the super mutant overlord, or another mutant leader, found outside or inside the factory. The player can also find one at the Wilson Atomatoys corporate HQ in a filing cabinet in the security office on the second floor. If the third speech check was passed with Arlen, you'll already possess one. Once inside, take the toy parts found on a shelf to the left of the room and return to The Slog.

Talk with Arlen again and give him the parts. In his excitement and awe, he'll gladly give you the caps reward agreed upon, ending the quest.

There are two items related to Arlen Glass: the Giddyup Buttercup toy parts and Marlene's holotape. Only the toy parts are required to complete the quest. However, the holotape can be given to Arlen for additional story line and reward.

Different dialogue options will appear based on whether or not the sole survivor has already cleared the factory and obtained the toy parts:

Once the quest has been completed, Arlen will remain in his workshop and continue working on assembling the toy.

Having Marlene's holotape in the inventory or stored at a settlement upon first meeting Arlen will have different outcomes:

After receiving the reward, Arlen will listen to the holotape again. If not already done so, the miscellaneous quest to find the toy parts may be initiated by speaking to Arlen after the recording finishes.

Upon visiting The Slog after some time, Arlen and his terminal will be gone. Instead, a Giddyup Buttercup and Arlen's note will be found on the counter.

Retrieved from "https://fallout.fandom.com/wiki/Giddyup_%27n_Go?oldid=3450175"
Community content is available under CC-BY-SA unless otherwise noted.