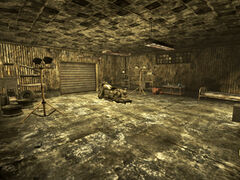 “If I had my way I'd dump it in the scrapyard in Novac and be done with the damn thing.”— Johnson Nash

Gibson scrap yard is a location in the Mojave Wasteland north of Novac. It is run by Old Lady Gibson.

Old Lady Gibson has been running this modest scrapyard for the last few years since the passing of her husband. All she has now are memories, and a collection of hounds that she dotes on.[1]

Gibson scrap yard consists of the yard and Old Lady Gibson's garage. The yard can be entered through the gate, with a number of paths winding around piles of destroyed vehicles and tires. There are a few dumpsters with various miscellaneous items, and owned metal boxes on some shelves on the east side of the yard.

Opposite the gate is Old Lady Gibson's garage, a metal shack housing three unusable mattresses - this is presumably where the numerous dogs belonging to Old Lady Gibson sleep. The garage has two rooms, the first quite small, containing a table and chairs, a fridge, and a broken Nuka-Cola vending machine. The second much larger room is the actual garage, in here there are a number of shelves, a motorcycle, and an owned bed. 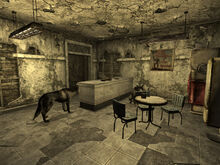 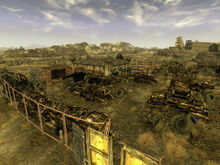 Retrieved from "https://fallout.fandom.com/wiki/Gibson_scrap_yard?oldid=2994829"
Community content is available under CC-BY-SA unless otherwise noted.