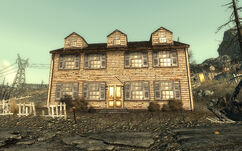 Gibson house is one of the buildings in Minefield - the others are: Benson House; Gillian House and Zane House.

The door to the house can be opened with the Ridgefield gate key that is on Arkansas, the sniper located in the destroyed building, or with a lockpick skill of 50. Gibson's key also unlocks this house and is found on Gibson's corpse in the Capitol Post building.

There is a dead raider in the living room and a model of home on a ruined table. It is a sculpture of a miniature suburban house, and it can be opened with Gibson's key or be lockpicked if the player has a Lockpick skill of 100. Unfortunately, even though it is strongly locked, it only contains a few minor items. A letter from Vault-Tec found within the house states that the family living in the home applied for a Vault but was declined. The letter also reveals that there are vaults in both Oklahoma and "newly annexed Canada" with available space.

In the small bedroom, there is a Duck and Cover poster on the wall where the window is located, and in the master bedroom you can find two skeletons on the bed huddled together.

Both the name of the house and the model of home are a reference to the Konami game Snatcher. A character named Gibson has a locked miniature model of his house, in his house.

Retrieved from "https://fallout.fandom.com/wiki/Gibson_house?oldid=1106997"
Community content is available under CC-BY-SA unless otherwise noted.