Gibson's shack is an unmarked location in the Mojave Wasteland, just west of Gibson scrap yard, past the power lines along the railroad tracks north of Novac.

According to Veronica, the comm station terminal found in the shack was used by Father Elijah to pass technological information to her and is used in the quest I Could Make You Care.[1]

The building is a destitute shack consisting of a campfire and various detritus. A broken shelving unit and hubcaps flank the entrance. Several bottles of alcohol are strewn about the room, including vodka, large whiskey bottles, empty whiskey bottles, regular whiskey bottles, and beer.

There are also a few chems including several Med-X, Jet, and Mentats scattered around. Two doses of Psycho can be found behind the bookshelf on the north wall.

Evidence of previous violence can be found in the shack, including a skeleton on a bed in the corner. A butter knife is stabbed into the television set. A bloody lawn mower blade lays on the ground. There is a finger impaled on a machete driven into the wall above the skeleton. If the Courier brushes past it, the machete and finger will fall to the ground.

It is unknown who the finger on the wall belongs to. The presence of skin and fresh blood would indicate that it is not from the skeleton, but only one skeletal hand is available to examine in the shack.

Alice Hostetler has a set of dialogue lines and movement packages directing her towards Gibson's shack. If convinced to fulfill her own dreams and leave her parents during Someone to Watch Over Me, she would eventually make her way towards Novac in search of a home, and finally choose to settle down inside the shack. However, a variable which controls the movement is not set correctly, so this scene will never appear. 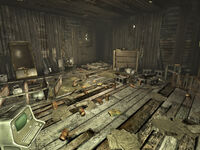 Exterior of the shack

Close up of the skeleton