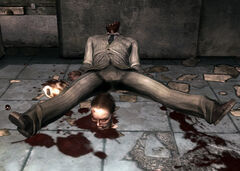 The unfortunate keeper of the note

Gibson's scrap of paper is a paper note in Fallout 3.

It is found on Gibson's corpse in the Capitol Post office building in L'Enfant. Gibson's house is located in Minefield. One must have the key (which can also be found on Arkansas) to unlock the door. Inside there will be a model of home (Very Hard lock) on a small table near the door and by the TV, that can also be unlocked with the key.

The note was written by Joel Burgess, lead level designer of Fallout 3.[1] It is part of a reference to Hideo Kojima's video game Snatcher, which starred a minor character named Jean-Jack Gibson who is also found decapitated in the same manner in the ruins of a factory. He too has a note upon him reading "Search the house!"