Fallout: New Vegas
“Oh I assure you, sir, they are very real and very large. Please do be careful.

Giant rats are creatures living in the Mojave Wasteland in 2281.

Giant rats appear to be larger versions of normal pre-War rats, although they appear to have lost most of their fur, they have spotted skin like molerats, and have glowing turquoise eyes. Similar to their pre-war counterparts, they have very large incisors. Giants rats are often found in darker areas, such as Cerulean Robotics, the broc flower cave and Vault 11.

Giant rats are light brown color, with glowing blue eyes and white hair down its back. The standard giant rat is equal in size to a mole rat. They are quite fast and attack in groups of three to seven.

These young rats look identical to fully grown giant rats, albeit smaller than the standard giant rat. They usually don't attack but instead run away. However, if pups are encountered with normal giant rats, they will accompany them in the assault.

Found in the broc flower cave and New Vegas sewers, rodents of unusual size are the largest of the mutated rats found in the Mojave Wasteland to date. They are identical to their giant cousins, save for their increased size and attack strength. They are aggressive and will attack on sight unless the player character has the Animal Friend perk. They can sometimes be found in Vault 11 if the Wild Wasteland perk is chosen.

These are uniquely large giant rats, with only two in existence. They are found in the east central sewers, in the same room as "Sweet" Jill. They are aggressive and will attack on sight. 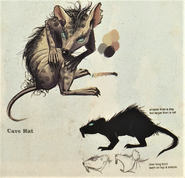