A Nice Day for a Right Wedding
Those!

Giant ants are creatures found in the Capital Wasteland in 2277.

Giant ants are large mutated arthropod insects of the Formicidae family, genus Camponotus, most likely black carpenter ants.[1] Some scientists theorize this mutation comes from the effects of extended exposure to radiation.[2] Giant ants have retained a strong swarm instinct and will attack prey in packs or double-down to protect the nest if their queen is threatened in any way.

They make a loud, chattering noise with their mandibles and are better adjusted to daylight than their California counterparts. There are five variants of these ants, including workers, soldiers, queens, invaders, and the mutated forager ants. Ant nectar can occasionally be looted from their corpses and refuse piles (found in their lairs).

Ants usually attack head-on in droves of up to five. They do not try to flank enemies but will surround them if they get close enough. Their mandibles can be devastating to a low-level player, but they are not much of a threat to those who are high-level or well-equipped. If their antennae are crippled, ants will frenzy and attack everything around them, including their own kind. The Entomologist perk will increase damage against giant ants and other insects by 50%.

This ant variant can only be found dead throughout the Capital Wasteland.

These are the colony's main defense against intruders. They are plentiful and will often overwhelm an enemy, either letting it run off or killing it on the spot, usually the latter.

As their name suggests, these ants do most of the work around the colony. They are relatively frail but are found in large groups.

The mother of their respective ant brood, this variant is roughly four to five times larger than an average giant ant. When threatened, her wings will buzz about and she will hiss at the enemy. She will then proceed to spit acidic saliva at the enemy in an attempt to ward it off. Ant queens are not very fast, though they do seem to notice targets from a distance and spit with surprising accuracy.

The queens are generally considered to be one of the "boss" characters in Fallout 3, as they have extremely high health (about half that of a super mutant behemoth) making them one of the few creatures in the Capital Wasteland that can survive a Nuka-grenade blast.

There are only three queens in Fallout 3: in Marigold station, Shalebridge, and the Corvega factory. The Marigold ant queen is the mother of the fire ants that have been harassing Grayditch. She was mutated by Doctor Lesko in an attempt to create smaller ants with a chemical mutagen that would be injected into the queen ant, but instead fire-spitting giant ants resulted (for a more detailed description see the fire ant page).

Invader ants are a species of ant found in Shalebridge that, as their name suggests, are invading the colony of the forager ants (see below). They have the same health as a worker ant, so they can still pack a punch for a low level player.

These ants are friendly and will not attack the player. They are small for mutated ants and live in the colony located in Shalebridge tunnels, which is under attack by a hostile, more aggressive colony of rival giant ants. The Lone Wanderer can help the forager ants by traveling into the rival ant nest and killing their queen. The growth of the colony can then be stimulated by injecting the egg clusters with stimpaks. These forager ants are the same as any friendly non-player character; they will become hostile if attacked. If shot, one of the others will not attack unless they are about two feet away. They are extremely small for regular wasteland ants, even smaller than radroaches. 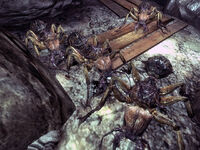 The largest group of ants in the game, 22 in the Corvega factory 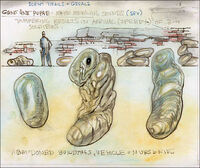 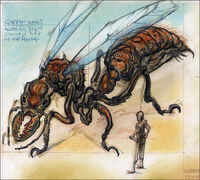 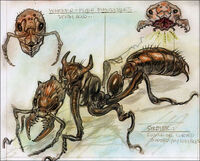