Ant Misbehavin'
Can You Find it in Your Heart?

Giant ants are mutated insects found in the Mojave Wasteland in 2281.

Giant ants are large mutated arthropod insects of the Formicidae family, genus Camponotus, most likely black carpenter ants.[1] Some scientists theorize this mutation comes from the effects of extended exposure to radiation.[2]

Giant ants are large insects protected by a yellow-brown carapace. They have large mandibles which are used to both hunt and protect themselves. Their long antennae sprouting out of the head act like sensors, allowing them to take in more information about their immediate environment.

These creatures can be a bit of a problem in the early stages of the game. Hitting their antennae will count towards a critical hit and will also frenzy them. Like their east-coast brethren, they are not particularly swift, and can easily be out-walked if the player character prefers to engage them at range.

The largest and strongest variant of the more common giant ant variants. This ant can be found accompanying smaller ants as they forage. Several can be found inside the Allied Technologies offices building.

The drones of the colony, responsible for labor and maintenance. What they lack in individual fortitude, they make up for with relentless attacks and swarm tactics. However, a worker ant's exoskeleton is not particularly hard compared to radscorpions. Their mandibles can cut through most leather and plastic with ease, even snapping bone on a lucky shot.

Giant worker ants can usually be found in barren stretches of desert in the Mojave such as the Ivanpah race track or Ivanpah Dry Lake. They usually walk around in groups, presumably looking for food.

The giant ant queen (or fire ant queen) is the largest creature in the Mojave Wasteland. Only one giant ant queen appears in Fallout: New Vegas, located in the ant mound south of the Allied Technologies offices and Camp McCarran, or north-west of REPCONN headquarters. 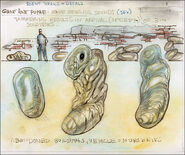 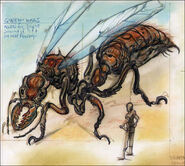