Giant albino ants are creatures found in the Scum Pits of Hoover Dam.

These horrific ants have adapted almost too well to the dark and toxic halls of the Scum Pits. Their exoskeleton is a translucent blue/white, their eyes glow red, and their lethal mandibles secrete a toxic green acidic poison.

Giant albino ants were to appear in Van Buren, the canceled Fallout 3 by Black Isle Studios. 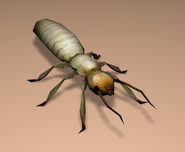 Add an image to this gallery
Retrieved from "https://fallout.fandom.com/wiki/Giant_albino_ant?oldid=1693159"
Community content is available under CC-BY-SA unless otherwise noted.