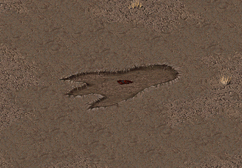 Tycho comments on the nature of the footprint: "Yeah, I'd stay the hell away from whatever made that. Seriously, I've never seen anything like that. I think our best option is to move on, fast." He is the only companion to do so.[1]

If violence level is low enough or playing the German censored version, it will be a normal corpse