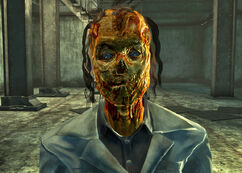 The ghoul scientist (simply called wastelander in-game) is a ghoul who works in the SatCom Array NW-05a in 2277.

After reading her terminal, it is clear that she is trying to utilize the United States' nuclear arsenal. She hired Talon Company to protect her and the SatCom Array. She has pinged the Highwater-Trousers nuclear platform, and is planning to eradicate life on a massive scale. However, she is still working on making the satellite aim somewhere else, since it is currently targeting an area that is uncomfortably close to the SatCom Array.

The ghoul scientist appears only in Fallout 3.

Retrieved from "https://fallout.fandom.com/wiki/Ghoul_scientist?oldid=3152100"
Community content is available under CC-BY-SA unless otherwise noted.